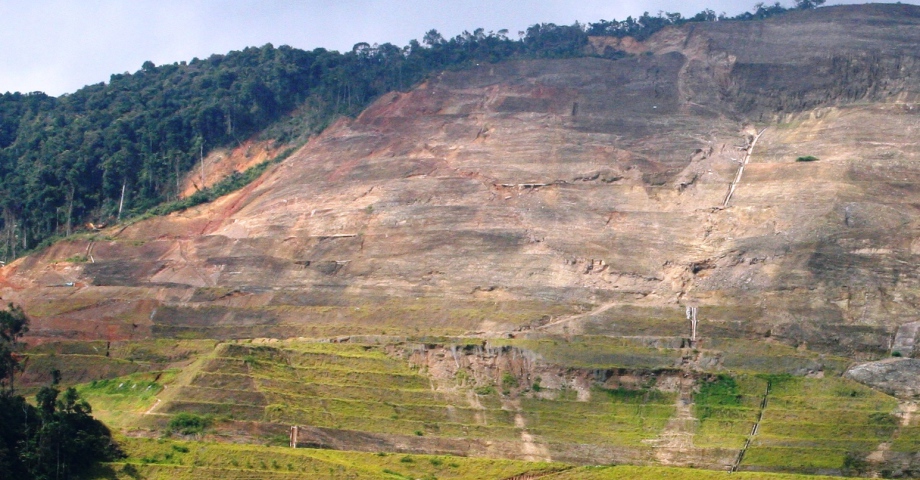 Landslides cause great damage and loss of life both from natural and man-made slopes and Steve Hencher has been involved in the design of slopes and investigating landslides throughout his career. Working within Hencher Associates Limited, within recent years, ivestigations have been carried out on extremely complex and difficult active landslides in Australia, Malaysia, Turkey and Indonesia, often in support of other teams trying to remedy the situation.

The rock slope failure described below occurred on a dry Sunday and involved sliding on very low angle discontinuities (much lower than the friction for a saw-cut surface). The investigation involved extensive shear testing of rock joint samples and these tests enabled aspects of the failure to be explained - a matter of chlorite coating on some surfaces and stress levels.  The shear test data, Appendix A is downloadable on the Shear Strength Page (under Site Investigation). 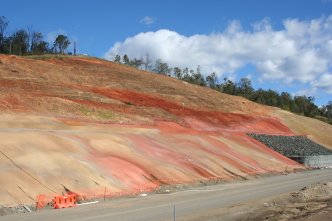 A landslide developed during construction of a new highway in Queensland, near Brisbane. What started out as a routine GI developed over years with more than 5 km of coring, despite 100% exposure, several geophysical surveys, well testing and radiometric age dating. The geology was extremely complex involving a trachyte lava flow that had bulldozed downhill into a lake full of sediments, dammed by pre-existing basalts. The distorted sediments, in turn, dammed the groundwater. Things were not helped by the presence of extensive smectite rich layers below the site and oozing from the basalt that was weathering in real time. The red area in the photograph is natural, hyaloclastite breccia - the reult of the trachyte impacting the lake sediments. The area involved extended well beneath and beyond the immediate area of the highway cuttings. Not easy.

A paper on investigation and analysis is given below.

The paper below was presented at a forum in Hong Kong in 2007.

A much more detailed paper on this fascinating case history where a slope was repeatedly investigated and analysed (incorrectly) until it finally failed in a catestrophic manner was published in Engineering Geology but we do not have an early version (not copyrighted) so if interested you will need to source the paper (or write and ask for a personal copy):